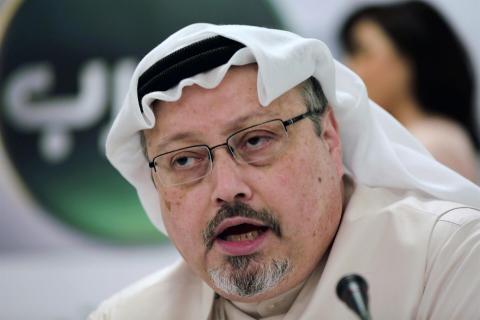 French radio RTL said the Saudi national, Khalid Aedh al-Otaibi, was arrested at the Roissy airport near Paris as he was trying to board a flight to Riyadh.

Al-Otaibi was one of over a dozen Saudi officials sanctioned by the U.S. Treasury in 2018 over Khashoggi's killing and dismemberment at the Saudi Consulate in Istanbul in 2018.

He was also mentioned in the declassified U.S. intelligence report that said Saudi Crown Prince Mohammed bin Salman had "approved" the operation that killed Khashoggi. The report used an alternate English transliteration of his last name.

The Saudi Embassy in Paris said the arrested man "had nothing to do with the case in question," and said the embassy expects his immediate release. It noted that Saudi Arabia already held a trial over the killing, though it was behind closed doors and the verdicts were criticized by rights groups and others for not holding to account or finding guilty anyone responsible behind organizing, ordering or overseeing the operation that killed Khashoggi.

French authorities were on Dec. 7 evening verifying the suspect's identity.

"Sometimes governments close their eyes about people who are pursued by justice in another country. I note with satisfaction that there was an arrest, and the police didn't close their eyes this time," he told...