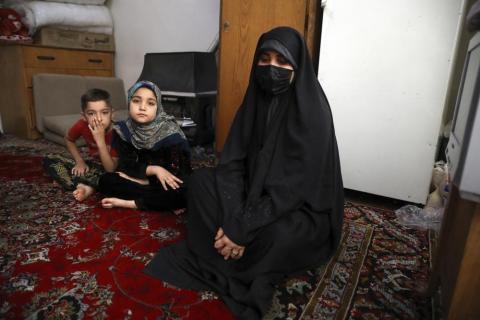 The Taliban members who killed her activist husband offered Zahra Husseini a deal: Marry one of us, and you'll be safe.

Husseini, 31, decided to flee. Through swaths of lawless flatlands she and her two small children trekked by foot, motorcycle and truck until reaching Iran.

As Afghanistan plunged into economic crisis after the United States withdrew troops and the Taliban seized power, the 960-kilometer (572-mile) long border with Iran became a lifeline for Afghans who piled into smugglers' pickups in desperate search of money and work.

But in recent weeks the desert crossing, long a dangerous corner of the world, has become a growing source of tension as an estimated 5,000 Afghans traverse it each day and the neighbours, erstwhile enemies that trade fuel, share water and have a tortured history , navigate an increasingly charged relationship.

In past weeks, skirmishes erupted between Taliban and Iranian border guards. Afghans in three cities rallied against Iran.

Demonstrators hurled stones and set fires outside an Iranian Consulate. A fatal stabbing spree, allegedly by an Afghan migrant, at Iran's holiest shrine sent shockwaves through the country.

Political analysts say even as both nations do not want an escalation, long-smoldering hostilities risk spiraling out of control.

"You have one of the world's worst-simmering refugee crises just chugging along on a daily pace and historical enmity," said Andrew Watkins, senior Afghanistan expert at the United States Institute of Peace. "Earthquakes will happen."

The perils are personal for Afghans slipping across the border like Husseini. Since the Taliban takeover, Iran has escalated its deportations of Afghan migrants, according to the U.N. migration agency,...