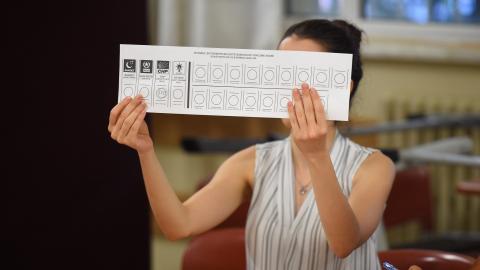 An election official holds up a ballot paper during the counting process for the Istanbul mayoral elections re-run in June 2019. Photo: EPA-EFE/AKIN CELIKTAS

The Venice Commission said that even under the new law, the election threshold remains "among the highest in Europe", despite being reduced from 10 per cent to 7 per cent.

"Most European countries using the proportional system in elections either lack any legal threshold at all (Finland, Ireland, Portugal or Switzerland) or set a maximum threshold of 5 per cent (Czech Republic, Germany, Poland or Romania)," the commission said.

The Venice Commission is an advisory body of the Council of Europe, composed of independent experts in the field of constitutional law.

The commission's opinion was prepared by legal and constitutional experts after a series of meetings with Turkish political parties, NGOs, ministries and bar associations.

The commission said that the law harms smaller, newer and opposition parties' chances in elections.

It said that the legislation "makes it more difficult for smaller and newer parties" to get into parliament.

"Requiring two party congresses to have taken place at national, provincial and district level before a party can take part in ensuring parliamentary elections constitutes an 'excessive burden' for newer parties," it explained.

The Venice Commission also said that there was a lack of dialogue before the law's adoption.

"Furthermore, inadequate consultation with opposition parties and civil society before the law's adoption reflects a lack of 'political consensus' for the law. The Turkish authorities attributed the adoption's speed to the relatively limited number of changes that the law introduced and explained that ...