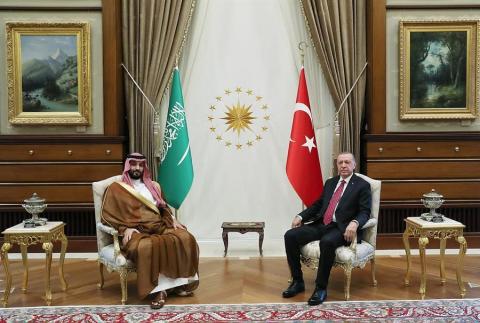 Türkiye and Saudi Arabia on June 22 declared their determination to start a "new era of cooperation" during a visit by Saudi Crown Prince Mohammed bin Salman, as they set aside years of acrimony following the brutal slaying of a Saudi columnist.

Prince Mohammed _ making his first trip to Türkiye following the killing, by Saudi agents, of Jamal Khashoggi at the kingdom's consulate in Istanbul _ held one-on-one talks with President Recep Tayyip Erdoğan that lasted some two hours. Prince Mohammed is on the last leg of a Middle East tour that also took him to Egypt and Jordan.

A joint statement released followed their meeting said the sides "strongly emphasized a joint determination to start a new era of cooperation in bilateral relations ... including political, economic, military, security and cultural relations."

The two sides also discussed the possibility of developing and diversifying trade and boosting investments and partnerships in various fields. The talks were held in an atmosphere of "sincerity and brotherhood embodying the depth of excellent relations between the two countries," according to the statement.

U.S. President Joe Biden is due to visit Saudi Arabia at the tail end of a July 13-16 regional trip that includes stops in Israel and the occupied West Bank.

Erdoğan visited Saudi Arabia in April, paying his first visit to the kingdom since 2017, a year before Khashoggi's killing.

Türkiye opened a trial in absentia against 26 Saudis suspected in Khashoggi's killing, but the court earlier this year ruled to halt the proceedings and transfer the case to Saudi Arabia, paving the way for the...