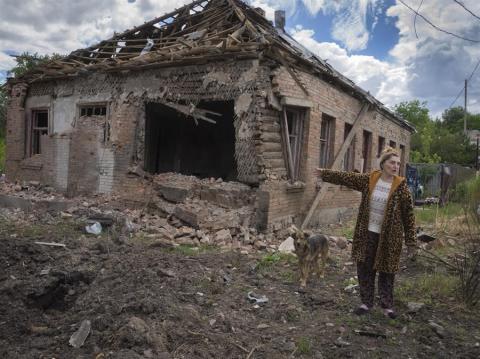 Ukrainian forces prepared on June 24 to retreat from the strategic city of Severodonetsk after weeks of fierce fighting, a setback that could pave the way for Russia to seize a larger swath of eastern Ukraine.

The announcement came shortly after the European Union granted Ukraine candidate status in a show of support for the former Soviet republic, though there is still a long path ahead to membership.
Moscow dismissed the EU decision as a move to "contain Russia" geopolitically.
Russia has focused its offensive on the Donbas region of eastern Ukraine after being repelled from the capital Kyiv and other areas in the first weeks of the February invasion. Since then its forces have gradually made progress despite encountering fierce resistance and sustaining heavy losses.
The industrial hub of Severodonetsk has been the scene of weeks of street battles as outgunned Ukrainians put up a stubborn defence.
But Sergiy Gaiday, governor of the Lugansk region that includes Severodonetsk, said that Ukrainian military forces in the city had received the order to withdraw.
"Remaining in positions that have been relentlessly shelled for months just doesn't make sense," he said on Telegram, adding that 90 percent of the city had been damaged.
The head of Severodonetsk's military administration, Roman Vlasenko, told Radio Svoboda that the Ukrainian army was still in the city and that it would "take them some time to retire".
Capturing Severodonetsk and its twin city of Lysychansk would effectively give the Russians control of Lugansk, and allow them to push further into the wider Donbas.
But Ukraine's retreat from Severodonetsk will not change the course of the war, said Ivan Klyszcz, an international relations researcher at...