Serbian Prime Minister Ana Brnabic said last night that Serbia has excellent results, not only in the field of vaccination but also in the economy, that it represents a role model for many, even when it comes to digital passports, which, as she said, everyone aknowledges.

But Veseli's proposal was described as political opportunism by opponents within Kosovo, and dismissed by international experts as impractical and extremely unlikely to succeed.

Alternative for Germany MP, Jens Kestner, posed this question in the Bundestag yesterday. 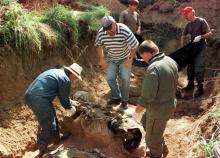 Five people who had been missing since the 1991-95 war in Croatia were identified on Friday at the forensic department in the eastern town of Osijek.

Among those whose remains were identified was Croatian soldier Tomislav Balic, a member of Croatian Army's 204th Vukovar Brigade.

"It is unbelievable to see a factory in Priboj after 40 years," the president said during the tour.
As he added, spouses Selma and Samir Rustemovi are responsible for many things.
"I will especially thank Dirk and Jens who invested money and did this, our German friends. Selma pushes with energy like a bulldozer, and Samir plays his part," he said jokingly.

While visiting the newly constructed hotel, he said that everything else in Serbia is going better, but that he is worried about the problem of Kosovo.
"I am afraid that this will accelerate, under pressure," he said.

He said that these lies were spread by Dragan Djilas, Vuk Jeremic, Bosko Obradovic and their various spokespersons such as Aleksic, Tepic and the like.

Serbian Foreign Minister Nikola Selakovic stated that the Belgrade government is considering the recall of its Warsaw Ambassador, Nikola Zurovac, who signed a letter of support to the Polish LGBT community without consulting the ministry or government.

Selakovic said he was supposed to be in Poland now, but that Polish officials had now cancelled his planned meetings in Warsaw.

First of all, as Kosovo Online reports, this is due to the fact that the Hague Tribunal did not investigate Slobodan Milosevic on the account of this act, but it also points out that it is ready to help prepare the lawsuit if Pristina asks her to do so, Ekonomija Online writes.

North Macedonia's prime minister, Zoran Zaev, has warned the EU that it's taken a reputational hit in the Balkans and will lose more ground to rival powers if it doesn't start membership talks with his country and Albania soon.

A collection of portraits of migrants and refugees who lost their lives on the so-called Balkan Route to Western Europe has opened in the Living Atelier DK gallery in Croatia's capital Zagreb.