Defence and deterrence, not destruction

Has NATO ever posed a real threat to Russia?

The EU's envoy for Serbia-Kosovo dialogue, Miroslav Lajcak, announced on Tuesday that Belgrade and Pristina have agreed to a 'road map' to further implement energy agreements made in 2013 and 2015.

Lajcak said that Belgrade and Pristina's negotiators adopted the Energy Agreements Implementation Roadmap, and described this as "a major step forward".

She stated that it was the job of the prosecution.
"It used to be that the parties decide who will be arrested, convicted and blackmailed. The SNS is not that party, but a party that is here to build institutions of the Republic of Serbia and implement reforms in the field of rule of law," Brnabic said. 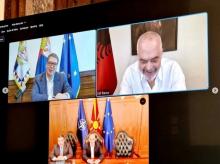 "Very pleased to announce that Kosovo and Serbia just adopted the Energy Agreements' Implementation Roadmap in the framework of the EU-facilitated Dialogue. This is a major step forward", Miroslav Lajk stated on Twitter.

Threats to journalist safety remain one of the greatest challenges to media freedom in the Balkans.

In the online environment, this issue is only exacerbated, as demonstrated by the cases BIRN has documented in the reporting period.

Officials from Serbia's ruling Serbian Progressive Party on Monday called for an investigation into Defence Minister Nebojsa Stefanovic after a former Interior Ministry official, Dijana Hrkalovic, who is currently on trial for alleged influence-peddling, accused him of gaining access to transcripts of covertly-recorded phonecalls involving President Aleksandar Vucic.

Turkish Foreign Minister Mevlt avuoğlu is holding a press conference together with his Serbian counterpart Nikola Selakovi.
Minister Nikola Selakovi was the first to address the public.

Namely, the report calls on Serbia and Kosovo to reach an agreement on the normalization of relations "based on mutual recognition". Part of the sentence on mutual recognition was not in the draft report, but was added through an amendment submitted by Lucas Mandl, a member of the European People's Party (EPP).

A TV crew of the "Traces Remain" investigative show of Bulgarian National Television, BNT, were attacked on Tuesday, June 14, on a road in front of the Podvirovi mine near Bosilegrad in southeast Serbia, Safejournalists organization reported on Wednesday.

The journalists came to Serbia to do a story about environmental pollution in the border area in the municipality of Bosilegrad.

Representatives of Albania, North Macedonia and Serbia signed another set of documents - an agreement on recognition of diplomas and three memoranda of understanding on various topics.

"You have to understand that Serbia is in a very different position compared to many others, because of its history, because of its special ties with Russia," Rama said.
He stated that he believes that Serbia should impose sanctions in time, but warned that Belgrade, which is largely dependent on Moscow for energy supplies, should not be pressured to do too much too soon.