Master plan of 'City on Water' project presented in Dubai 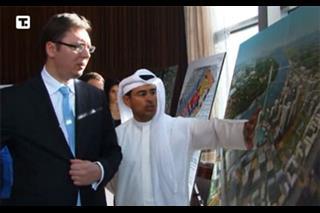 On this occasion, the ideas for the solution concerning the Belgrade Tower and shopping mall and Eagle Hill company which will build 'City on Water' has already issued a call for architectural solutions for these two facilities.

After the meeting, Vucic told reporters that companies and architects from Belgrade would be included in the project 'City on Water' and that the project will hire around 20,000 people.

“Belgrade will become a regional centre. We will be a country which attracts the biggest number of tourists and investors in the region,” Vucic said.

Noting that attracting foreign investments calls for political and economic stability, Vucic said that these conditions in Serbia have been fulfilled.

The total area of 'City on Water', including the housing and commercial area will total 1,850,000 square metres.

One of the most important facilities, the tower of Belgrade, will be completed by 2017, project author Mohammed Alabar stated.

At the presentation in Belgrade, Vucic said that the works will begin in May already and the entire work should be completed by 2019.

On this occasion, Vucic noted that investors from UAE will invest USD 3 billion in the project and that they will share the profit from real estate sale in the area...