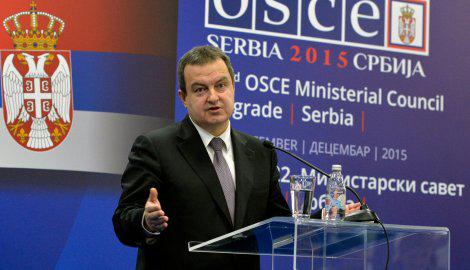 Serbia respects the rights of the Albanian minority, while schools will not be able to use textbooks stating that "Kosovo is independent", says Ivica Dacic.

The foreign minister made the comments in the national assembly on Wednesday, in responding to Riza Halimi, a deputy from the southern region known as "the Presevo valley" - home to the largest ethnic Albanian community outside of Kosovo.

Kosovo is Serbia's southern province where ethnic Albanians unilaterally declared independence in 2008 - a move Serbia considers a violation of its Constitution and territorial integrity.

"You want textbooks from Kosovo or from Albania to be used in Serbia, that it is taught in Serbia that Kosovo is independent, that (Serbian Orthodox monastery of Decani) is a part of some dynasty of yours? That will not happen, you can call on whoever you want," Dacic said on Wednesday.

The exchange with Halimit took place during a debate in the assembly dedicated to the 2016 state budget bill, when the deputy spoke about the rights of Albanians in southern Serbia, which he said are not being respected.

The minister, however, said that Albanians in those region "should not seek help from the outside, and should resolve this issue with their state."

"The Serb people in Albania would be over the moon if they had ten times less the rights than you have here, their surnames have been changed, many of them cannot get them back, they face problems organizing themselves, what 'national council,' what are you talking about," Dacic asked Halimi.

He added it was "high time" Serbia acted as a serious state and placed the issue of the treatment of...