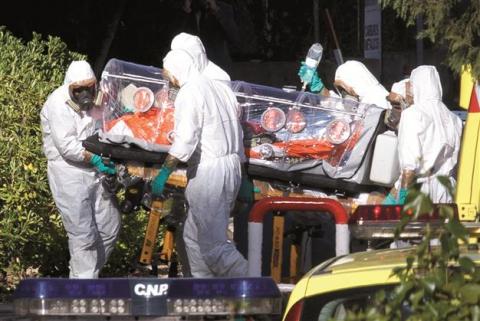 Health workers in protective gear wheel a stretcher into a hospital with one of two Spaniards who were repatriated from Liberia, shortly after their arrival in Madrid.

The Geneva-based U.N. health agency said the possible consequences of a further international spread of the outbreak, which has killed almost 1,000 people in four West African countries, were âparticularly seriousâ in view of the virulence of the virus.

âA coordinated international response is deemed essential to stop and reverse the international spread of Ebola,â the WHO said in a statement after a two-day meeting of its emergency committee on Ebola. The declaration of an international emergency will have the effect of raising the level of vigilance on the virus. âThe outbreak is moving faster than we can control it,â the WHOâs director-general Margaret Chan told reporters on a telephone briefing from the WHOâs Geneva headquarters.

âThe declaration ... will galvanise the attention of leaders of all countries at the top level. It cannot be done by the ministries of health alone.â The agency said that, while all states with Ebola transmission - so far Guinea, Liberia, Nigeria and Sierra Leone - should declare a national emergency, there should be no general ban on international travel or trade. Ebola has no proven cures and there is no vaccine to prevent infection, so treatment focuses on alleviating symptoms such as fever, vomiting and diarrhoea - all of which can contribute to severe dehydration.

Keiji Fukuda, the WHOâs head of health security, stressed that, with the right measures to deal with infected people, the spread of Ebola - which is transmitted...