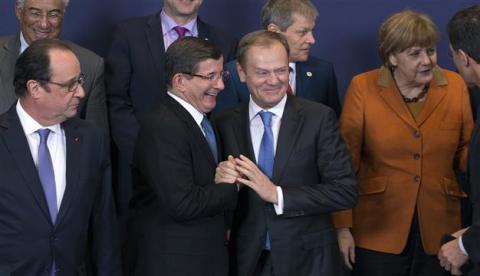 The EU and Turkey hail a deal to stanch the flow of migrants to the bloc ahead of an ultimate agreement next weekEU President Donald Tusk has described the outcome of an extended Turkey-European Union summit on March 7 as a "breakthrough," saying he would now work on the legal details to reach a final deal at a European summit in Brussels on March 17-18.

"We all of us are aware that in fact we have a breakthrough now," Tusk told a post-summit press conference in Brussels.

Tusk, who toured Turkey, Greece and the Balkans in the run-up to the summit, said it was a major step in ending the continent's biggest migration crisis since World War II.

European Commission Chief Jean-Claude Juncker called the plan a "real game changer," insisting that it was "legally feasible" despite questions from rights groups about whether it would breach international laws on the treatment of refugees.

According to the deal reached during the summit, Ankara will take back every irregular migrant that crosses from Turkey to the islands of EU member Greece.

In return, the EU will then resettle one Syrian living in Turkey on its territory for every Syrian migrant Ankara takes back from Greece.

The hope is that the plan will eliminate incentives for migrants to come to Greece by boat.

Davuto?lu asked for an extra 3 billion euros ($3.3 billion) in aid for the Syrians, adding that the money would only be used for the refugees.

Turkey is the main launching point migrants making the dangerous crossing over the Aegean Sea to the Greek islands. It hosts 2.7 million refugees from the five...