Leftists interrupt Levy's speech, hit him in face with cake 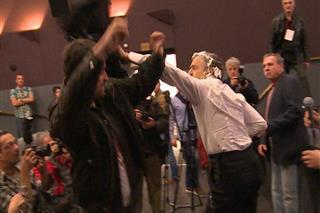 BELGRADE - Shouting "Get out of Belgrade, murderer" and "This bastard advocated a bombing of Yugoslavia eight years prior to the NATO intervention", three members of the left-wing organisation SKOJ interrupted a speech by controversial French philosopher Bernard-Henri Levy after late Wednesday's screening of his film Peshmerga at the BELDOCS documentary film festival.

Levy was hit in the face with a cake just seconds after starting to speak to the audience at Dvorana Kulturnog centra in Belgrade.