Sofia and Skopje with a Joint Exhibition of Archaeological Discoveries 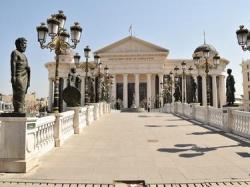 The exhibition is organized jointly by the National Archaeological Institute with a museum at the Bulgarian Academy of Sciences - Sofia and the National Institute of Archaeological Museum of Macedonia - Skopje and is dedicated to the 100th anniversary of the discovery of the necropolis. The exhibition in Skopje is extremely important, as for the first time almost all the findings from this historically important necropolis will be presented. The objects are from the permanent exhibition of NAIM at the Bulgarian Academy of Sciences in Sofia, the National Museum of Belgrade and the Museum in Ohrid.

Apart from its artistic and historical contribution, the exhibition is a positive act for the development and deepening of cultural cooperation between the three Balkan states - the Republic of Bulgaria, the Republic of Northern Macedonia and the Republic of Serbia.

"I expect that we will be harsher towards Serbia"

"CSM is a must. Serbia will not give up, nor the EU"
With Ruling Party Ties, Serbian Right-Wing ‘Security’ Groups Flourish

Vučić: "I returned Law on Expropriation to Parliament, Referendum Act to be revised"

The EU will Recognize Nuclear Energy and Natural Gas as Clean

DB Leader after the Coalition Meeting: There is no Drama, Everything is in Normal Working Order

Asen Vassilev: We hope to have a Coalition Agreement by the End of the Day Tomorrow

The Three parties in Democratic Bulgaria Support the Coalition Agreement

Katsarov: Politicians who are Loud Opponents of Vaccines are also Responsible for High Mortality