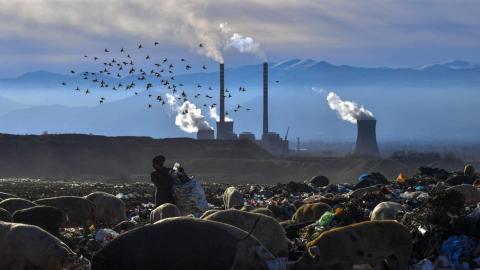 But while Greens in countries such as Germany, France and Britain have a 40-year head start in learning from mistakes and engaging with the public, environmentalists in former communist nations find the odds stacked against them.

Analysts say the EU's younger member states have failed to catch Europe's so-called Green wave because voters there care more about bread-and-butter concerns like jobs, healthcare and social security than global issues such as climate change.

Meanwhile, embryonic Green parties in Western Balkan countries keen to join the EU are struggling to drag the movement from the world of grassroots activism into mainstream politics.

Michal Berg, a member of the Czech Green Party who oversees Southeast Europe for the European Greens, an alliance of national Green parties, said the movement is working on a country-by-country analysis to help it expand into new territory.

"This is one of our top priorities in the coming period," he said. "We've already started drafting a strategy how to develop green politics in the region."

While Greens notched 74 seats across the EU in May — 20 more than in the previous election — only Czech Republic, Latvia and Lithuania contributed to the tally from Central or Eastern Europe, and with only six seats between them.

Along the EU's southeastern flank, the Green vote hardly registers. And in EU hopefuls in the Western Balkans, where recognisable Green parties are few and far between, the situation is even worse.

Berg said the European Greens will now focus on "clusters" of countries to...