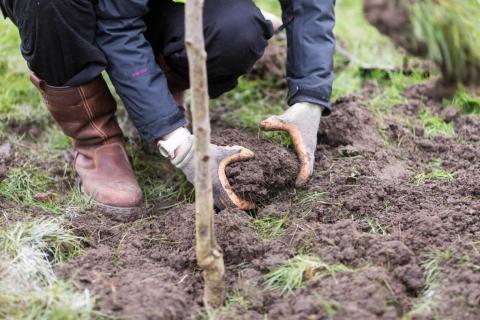 Turkey's agriculture and forestry minister said 82 million saplings will be planted across the country until November this year.

"The rooting average of the saplings planted on Nov. 11, 2019 is 95 percent," Bekir Pakdemirli told Anadolu Agency's Editors' Desk in the capital Ankara.

Over 11 million saplings were planted in more than 2,000 different localities across Turkey on Nov. 11 at 11.11 a.m. local time, as part of the Breath for the Future campaign launched by the ministry.

Nov. 11 was declared National Forestation Day to be marked annually.

The ministry planted the saplings on behalf of people who adopted them online as part of the massive forestation campaign.

Pakdemirli added that the ministry itself plants nearly 300 million trees per year.

Touching on Turkey's meat import, Pakdemirli said the ministry has not given certificate for livestocks since Oct. 26.

He added that Turkey is a self-sufficient country regarding meat, and citizens can access to meat easily.

Pakdemirli underlined that Turkey's standards for genetically modified organism (gmo) are far beyond that of the EU.

Agricultural pesticide consumption in Turkey is 2.3 kilograms per one hectare, while it was 4 kg in Europe, 11.8 kg in Japan, 7.9 kg in the Netherlands, 3.6 kg in France, and 13.1 kg in China, he elaborated.

"Our products are above the EU standards, this situation should reflect on our prices," he said.

Mitsotakis: Turkey-Libya deal a ‘threat’ to states in the region

Best restaurants in Turkey get decorated

Best restaurants in Turkey get decorated