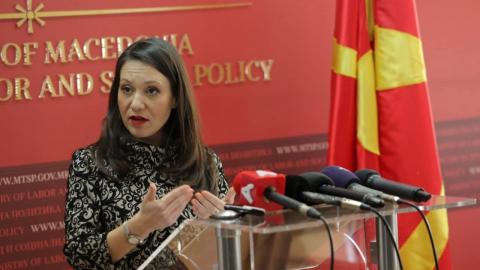 A minister in North Macedonia's technical government, formed to preside over the April elections, has defended her right to challenge the country's landmark agreement with Greece over its name, saying she was only correcting a historic injustice.

Labour Minister Rashela Mizrahi, who comes from main right-wing opposition VMRO DPMNE party, on Sunday said she was merely correcting an "injustice" by standing in front of a plaque bearing the country's old name - Republic of Macedonia - instead of the new name it adopted as a result of a deal with Greece, Republic of North Macedonia.

She ironically said she "should thank" her predecessor, current Vice Prime minister Mila Carovska, for not having commissioned a new plaque for the ministry with the new name, and so "recognising that this is the Republic of Macedonia and that [we are] Macedonians".

Carovska condemned the remark, and displayed pictures of a new plaque with the new name of the country on social networks.

On Sunday, Foreign Minister Nikola Dimitrov accused Mizrahi of disrespecting the constitution and of jeopardizing the country's Euro-Atlantic future and the so-called "name" agreement with Greece - which the EU strongly supported.

He said he had received a verbal note of protest from Athens over Mizrahi's action, adding that he would propose her dismissal from the caretaker government, tasked to organise the April general elections, if she failed to back down.

On June 17, 2018, Dimitrov signed the historic accord with Greece aimed at ending the long dispute over Macedonia's name.

Under the deal, the country changed its name and incorporated the new one into the constitution. In exchange, Greece ended its long informal blockade on the country's moves to join NATO and...