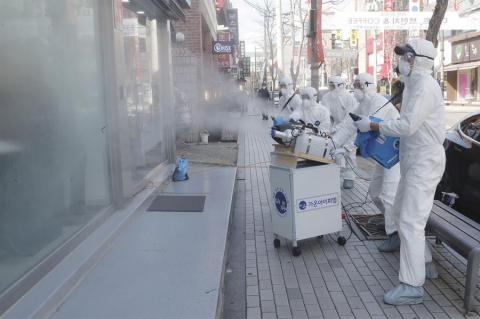 As the worst-hit areas of Asia continued to struggle with a viral epidemic, with hundreds more cases reported on Feb. 27 in South Korea and China, worries about infection and containment spread across the globe.

For the first time, the coronavirus has caused more new cases outside China, the epicenter of the outbreak, than inside the country. With Brazil on Feb. 26 confirming Latin America's first case, the virus has reached every continent but Antarctica.

The United States, which has 60 cases, hasn't been spared the fear that has swept Asia, Europe and the Mideast. President Donald Trump declared that the U.S. was "very, very ready" for whatever threat the coronavirus brings, and he put Vice President Mike Pence in charge of overseeing the country's response.

As the epidemic expanded geographically, worries about the COVID-19 illness multiplied.

"The sudden increases of cases in Italy, the Islamic Republic of Iran and the Republic of Korea are deeply concerning," WHO director-general Tedros Adhanom Ghebreyesus said.

Though the virus has pushed into countries both rich and poor, its arrival in places with little ability to detect, respond and contain it brought worry that it could run rampant there and spread easily elsewhere.

Major gatherings have been eyed warily, with schools closing, churches moving services online, food deliveries booming and many business conferences and sporting events canceled. The Summer Olympics begin July 24 in Tokyo, and Japan's top government spokesman said Olympics preparations would proceed and the games would go on as planned.

South Korea reported 505 more cases on Feb. 27, bringing its total to 1,766. Most of the new cases were in the country's fourth-biggest city, Daegu, where the...

Week in Review: Response and Responsibility

The NBA Playoffs and Player Comebacks