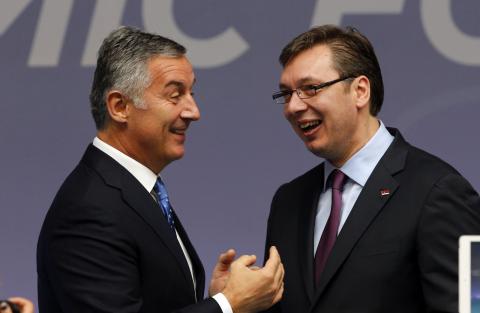 Since December last year, when Montenegro adopted its controversial law regulating freedom of religion, the country has been caught up in an ongoing crisis that has sparked street protests and caused serious tensions between the Serbian Orthodox Church in Montenegro and its supporters on one side and the ruling Democratic Party of Socialists led by President Milo Djukanovic on the other.

But Serbian officials, President Aleksandar Vucic in particular, have given unusually moderate responses to the crisis in neighbouring Montenegro, where Serbs constitute 28.7 per cent of the population according to the most recent census, and have appealed for a peaceful resolution of the dispute.

Protests against the controversial law regulating freedom of religion in Montenegro

This was highlighted on May 14, when Vucic commented on the arrest of a Serbian Orthodox bishop and seven priests holding a religious procession in violation of the ban on public gatherings imposed in Montenegro to curb the spread of the coronavirus, which sparked violent clashes between Orthodox protesters and police.

"For us, this is an extremely difficult situation, on the one hand you must not interfere in the internal affairs of another state and that is why you are careful about every word, but on the other hand it is the Serbian Orthodox Church and a part of our people," he said.

In January, Vucic met Djukanovic in Jerusalem and discussed the problem "as normal and civilised people", as the Serbian president put it. "We agreed...