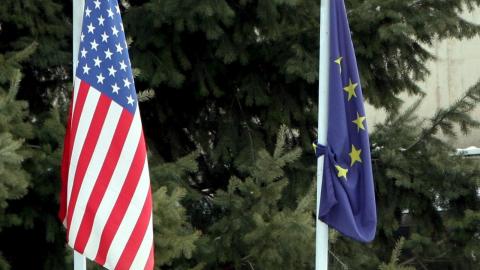 Both the EU and the US opposed tariffs on the grounds that they are an obstacle to the resumption of Kosovo-Serbia dialogue. For the first time in decades, Kosovo found itself on the receiving end of international criticism, with the West effectively succumbing to Serbia's demand for an unconditional lifting of the tariffs as a condition to resume the dialogue.

Internally, the tariffs created a rift. A combination of external pressures and internal political disputes brought down the government in July 2019, triggering an early election. With dissatisfaction over the mismanagement of post-independence years running high in Kosovo, a new election brought about a renewed trust in democracy as a new generation of voters instigated a political change.

The governing parties, the Democratic Party of Kosovo (PDK), the Alliance for the Future of Kosovo (AAK) and the Social Democratic Initiative (NISMA) - all of them led by senior leaders of the 1998-99 war, suffered a sweeping defeat. A pro-reformist opposition led by Vetevendosje (Self-Determination), a leftist protest party, and the Democratic League of Kosovo (LDK), a centre-right traditional party that vowed to fight corruption and tackle high unemployment came out as winners.

But the promising reform-minded agenda gave way quickly to international pressure to jump-start the dialogue between Kosovo and Serbia as the most pressing matter.

The escalating US pressure spearheaded by Richard Grenell, the US presidential envoy...