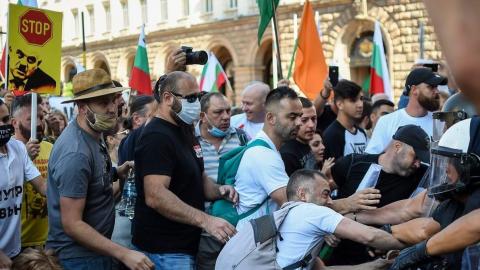 Police clash with protesters during a protest in Sofia on September 2, 2020, the day PM Boyko Borissov's cabinet agreed on a new draft of the constitution. Photo: EPA-EFE/Borislav Troshev

"The launch of the constitutional reform was not preceded by an appropriate public debate, the draft has been prepared within the parliamentary majority, seemingly without any external input, and the reasons for certain amendments were not well explained," the report on Monday stated.

The Venice Commission also said the fact that the reform does not address the issue of making the Prosecutor General eligible for criminal investigation if needed was "a missed opportunity".

The current Prosecutor General, Ivan Geshev, has been heavily criticized by protesters, activists and opposition voices ever since he assumed his post in late-2019.

"The Bulgarian authorities must clarify the reasons behind each proposal and ensure significant participation of the public, experts and all political forces in this process," the statement said.

On September 2, parliament, headed by the ruling centre-right GERB party and its partners, United Patriots, voted to back the planned amendments.

The move was widely seen as a diversionary tactic - a way for the coalition to take the heat out of months of street protests and cement the status quo at least until March 2021, when the next parliamentary elections are scheduled.

To be fully implemented, the amendments must be accepted by a Grand National Assembly, for which no date has been set so far.

The draft changes, promoted by Prime MInister Boyko Borissov as a "restart", include several contentious suggested amendments, which would increase the power of the General Prosecutor, and shrink...