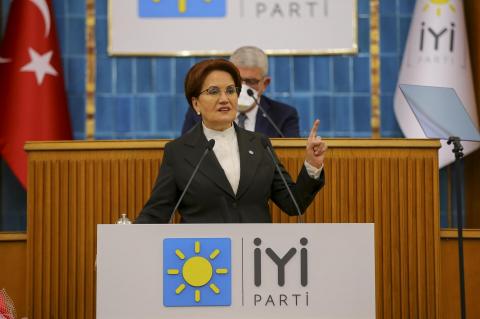 İYİ (Good) Party leader Meral Akşener has called on the government to take necessary steps against the interception of the Turkish merchant ship by an EU mission in the eastern Mediterranean.

"We cannot get over this as if it was a simple incident. I expect the government to take the necessary steps to protect our rights arising from international law," she said, speaking at her parliamentary group meeting on Nov. 24.

The incident in the Mediterranean is a matter of national security for Turkey, she stated.

The inspection carried out at the Turkish flagged ship without the consent of Turkey's government is "in a sense, a border violation. Because a ship in the international waters is considered the territory of the country it has the flag," she said.

The İYİ Party leader also criticized President Recep Tayyip Erdoğan for his economic policies and suggested that the president's argument about interest rates contradicts the government practices on monetary policy.

In the last two years, since Turkey embarked on the presidential system, the cost of the "incorrect borrowing strategy to our budget has been 135 billion Turkish Liras," she said.

Erdogan's party-based presidential system and his "insistence" for keeping his son-in-law Berat Albayrak as the finance minister "have cost us 135 billion liras," Akşener said.

Recalling Erdoğan's pledge for reforms in the economy, she said the best reform would be "giving up the presidential system." She emphasized...