Cypriots cycle through fenced town for first time after 46 years 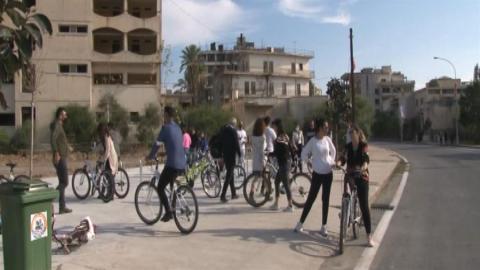 The once ghost town of Varosha in Turkish Cyprus has been opened for bicycle tours after it was opened to civilians on Oct. 9 in the wake of a visit by Turkish President Recep Tayyip Erdoğan.

Visitors can now rent a bicycle, one of the 600 donated by Konya Municipality in Turkey, to tour the area, which had been closed since August 1974 when the area was abandoned by its population ahead of the advancing Turkish army.

While the bikes are rented to visitors for two hours for 10 Turkish Liras ($1.20), their identification cards are given to the military officers during the rental.

Turkey's ambassador to Nicosia Ali Murat Başçeri and Famagusta Mayor İsmail Arter visited the ghost town, touring the city on bikes along with some Turkish Cypriots.

Başçeri also briefly chatted with members of the Lordos family, the legal Greek Cypriot legal owner of several properties, including five-star hotels and apartments, in the fenced town.

"I hope Varosha will be reunited with Famagusta after 46 years when the former inhabitants and owners [of the properties] return to their homes in the city," Başçeri said, adding that this way, Famagusta will be saved from living in a closed area right next to it.

Some 281 Greek Cypriots sought compensation from Turkish Cyprus' Immovable Property Commission (IPC) for houses and businesses in the closed off area on the divided island, according to Turkish Cypriot officials.

Meanwhile, the main avenue in Varosha has been renamed after Semih Sancar, Turkey's former chief of the general staff from 1973 to 1978.

Before parts of the coastal town were reopened, Varosha had been a town to which entry was forbidden, except for Turkish army personnel stationed in...