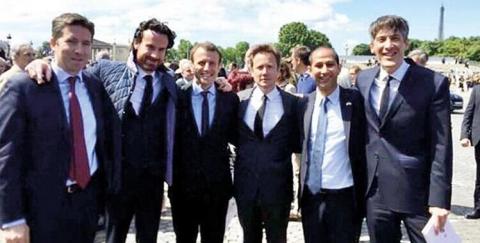 Turkey has appointed Ambassador Ali Onaner as its envoy to Paris, who was one of the classmates of French President Emmanuel Macron at the Ecole National d'Administration (ENA), also known as the National School of Administration, in Paris in the early 2000s, daily Hürriyet reported and printed a picture depicting the two together from their school days.

The appointment of an ambassador with fluency in French and a good knowledge of the French culture is considered to be a positive step by Turkey in terms of trying to ease the months-long bilateral tension.

Onaner is currently serving as Turkey's Ambassador to Tunisia but will soon move to Paris to take over the job from the current ambassador, İsmail Hakkı Musa. The new Turkish ambassador to France is not unfamiliar with the Turkish Embassy in Paris as he served there in different positions between 2012 and 2017. His first appointment to Paris as a young diplomat was between 2002 and 2004.

What makes Onaner's appointment notable is the fact that he and Macron happened to pursue their master's degree at the ENA during the same years between 2002 and 2004. The two had taken the same classes at the prestigious school whose graduates turn out to make their careers within the French public service.

French magazine Le Point has underlined the acquaintance between the two and asked whether the appointment of Onaner may be a first step in establishing a new dialogue between the two sparring NATO allies.

The ties between Turkey and France, both NATO allies, have strained since late 2019 as the latter sharply criticized a Turkish military offensive into northeastern Syria. The row between the two deepened after Turkey had rushed to the defense of the internationally-recognized Government...