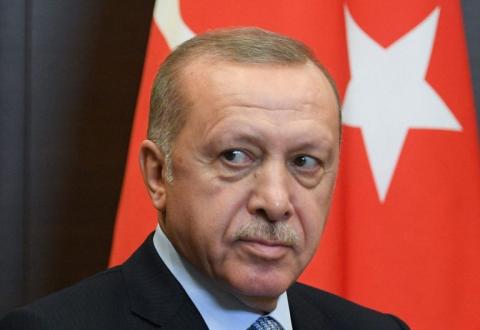 In the past year, Turkish President Recep Tayyip Erdogan and the political-military leadershisp of his country did everything in their power to highlight their geopolitical aims in a vast expanse of territory: The Southeastern Mediterranean, the Middle East, the Balkans, the Black Sea, and the Caucasus.

Their actions at every turn emphasised the theories and strategy of pursuing the «Blue Motherland» and neo-Ottomanism.

In a self-satisfied manner Erdogan attempted to show the international community that his country is a strong regional power with forces, capabilities, ambitious goals, and the aim of dominating the broader region.

It wanted to pose as the leader and protector of the Muslim world.

In the name of his supercilious ambitions he clashed with the Americans, «allied» with Putin, and damaged ties with Israel and most Arab countries.

Erdogan exerted enormous pressure on Greece and Cyprus by carrying out war-like operations in the Aegean, Thrace, and elsewhere, not to mention his provocative rhetoric in insulting and fiery speeches which even when taken alone created the atmosphere for a clash.

Yet, with this climate of clashing and fueling disputes throughout 2020 Mr. Erdogan did no service to his country.

On the contrary, he aggravated international concerns, rocked any remaining trust in the already vulnerable and unstable Turkish economy, and put himself in the exceptionally difficult position of having to constantly seek capital in order to fund an outdated vision that from its very conception was problematical.

The impasse in Turkish politics was fully revealed after the defeat of his ideological bedfellow, Donald Trump, who until last November glaringly supported and provided cover for Erdogan.