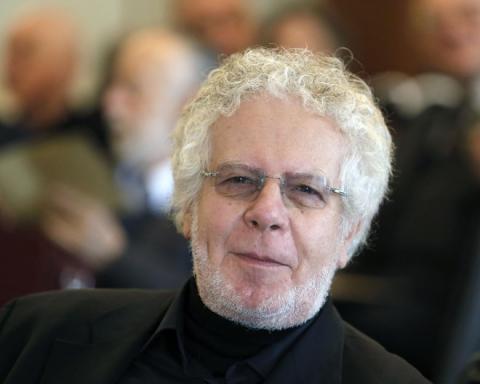 Ljubljana – Marko Mušič, one of the most distinguished Slovenian architects, comes from a long line of architects. He will receive the Prešeren Prize for lifetime-achievement, the country’s top accolade for artistic accomplishments, after leaving a notable mark with his work in Slovenia and throughout the former Yugoslavia.

Five of Mušič’s ancestors were architects, including his father Marjan Mušič, which he sees as a privilege. He told the STA in an interview that he “simply worshipped” his father, who was a “refined art connoisseur, a profound architectural theorist and historian, an excellent project manager, a classic of the Slovenian architectural drawing and of course a prolific and extraordinary writer”.

Mušič (1941) graduated in 1966 under the mentorship of professor Edvard Ravnikar, who just like Mušič’s father was a student of the great architect Jože Plečnik (1872-1957). He continued his studies in Denmark and the US, where he cooperated with architect and archaeologist Ejnar Dyggve and with US architect Louis Kahn, respectively.

Kahn left a deep impression on Mušič. “I was drawn to his philosophy of architecture and in particular his honouring of tradition and the culture of architectural history,” he told the STA.

“The clarity of his architectural composition and the sense of symbolism have always stood out. He was unlike anybody else and his architectural designs were such as well. He designed few buildings, but they were all in line with his motto that you must give each building a soul.”

Mušič considered staying in the US, where opportunities for architects were immense, but Kahn “convinced me to go to Skopje immediately and continue and finish my great and important work there,” he said in a reference to his work in the Macedonian capital.

In the 1960s and 1970s, Mušič left his mark in former Yugoslavian cities from Zagreb through Belgrade to Skopje and Bitola. “That was a period of enthusiasm, faith in the architecture, youthful zeal, new opportunities and of course competitiveness,” he told the STA, saying Slovenian architects had been particularly esteemed in the former Yugoslavia.

He said architecture had had full political support at the time. “Interestingly, I was never asked why I’m not a member of the League of Communists or persuaded that this was needed if I were to be the chief architect.”

In the 1980s, he started focussing on Slovenia. This was a time when Postmodernism radically ended the period of Modernism and Jože Plečnik was “rehabilitated”. Mušič was strongly affected by this and his architectural language started containing elements of classical architecture although using modern material and showing his own personal style.

He has a strong connection to Plečnik. “My relationship with Plečnik has in particular a creative charge. Every one of his works, designs or sketches spontaneously reveals creative saturation, which is an inexhaustible source of interest, admiration and also new creative encouragement.”

Mušič’s most important projects in Ljubljana are the Ljubljana railway station, the Incarnation Church in the Dravlje borough, and the New Žale Cemetery. He is also the author of the Teharje memorial park dedicated to the victims of post-war killings.

Three of his projects, including the New National and University Library, Apostolic Nunciature in Ljubljana, and the Ljubljana passenger terminal have not be realised, which he said “left a slightly bitter aftertaste”.

He feels particularly close to memorial architecture, which he focussed on in the 1990s. “When designing such projects we must be aware of Wittgenstein’s belief that the meaning of ethics and aesthetics is to reveal the inexpressible … We must be aware that every part of this space has its symbolic and ritual function.”

Mušič is lauded by the jury conferring the Prešeren Prize for his unique architectural path, his “particular, at times controversial perspective standing against the ‘flow of the time’ and architectural trends, and which still aspires to ‘architecture for all times'”, something Plečnik had set high standards for.

Active in architecture in Slovenia and the broader Balkan region for almost 60 years, Mušič has a special place in this space and has been considered a wunderkind, the Prešeren Prize jury said. He has received several awards, including the Prešeren Fund Prize for outstanding achievements, and the Plečnik and Valvasor awards.

The latest international recognition of his work was the inclusion of his works in the big exhibition of Yugoslavian architecture in MoMA in New York in 2018.

“All awards are pleasant companions, but the Prešeren Prize of course has a special significance and ring to it. On the one hand it is a recognition for past achievements, but it is also an encouragement for the future, as even those of us who have walked a long way already are optimistic about the future and new challenges,” he said.