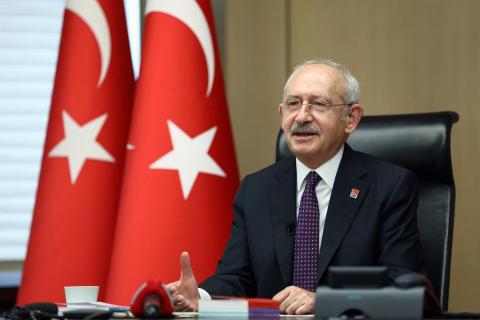 "If you are going to punish 6.5 million people by closing the HDP, then it is not democracy. The government wants to punish all Kurds who do not vote for it," Kılıçdaroğlu said, speaking at the KRT private broadcaster.

"You are already arresting people, assigning trustees [to the municipalities]. You are right or wrong is not clear. An extraordinary pressure is being exerted on the HDP," the CHP leader said.

He suggested that the government wants to punish HDP voters because they did not vote for the ruling Justice and Development Party (AKP).

Nationalist Movement Party (MHP) leader Devlet Bahçeli certainly wants the closure of the HDP, but the AKP does not back such a "harsh move," the politician said.

Expressing a view that closing political parties did not yield the intended results for previous administrations in Turkey, Kılıçdaroğlu said that only the nation could decide whether a political party should fade away in the political arena of the country.

Kılıçdaroğlu said there could be dissidents from the CHP and İYİ (Good) Party and that they can form a new party as well, but the government aims to mess up the internal affairs of opposition parties.

The AKP aims to "divide the CHP, to show that İYİ Party and HDP stand side by side, leaving İYİ Party in a difficult situation, and to mess up the Felicity Party while seeking a way if they can tear the Felicity Party from the Nation's Alliance," Kılıçdaroğlu said, claiming that the government has mobilized all the institutions within the state in this...