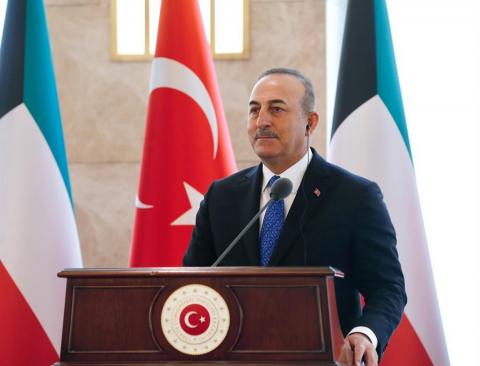 Protocol officers from Ankara and Brussels had discussed arrangements before a visit by the top officials of the European Union to Turkey, and the protocol order was arranged in line with the suggestions of the EU, Foreign Minister Mevlüt Çavuşoğlu said.

"In the protocol, the demands of the EU party have been met here. Such a seating arrangement has been arranged upon the suggestions of the EU," Çavuşoğlu said on April 8 at a press conference with Kuwaiti Foreign Minister Dr. Ahmed Nasir al-Muhammed al-Sabah.

"There are unfair accusations against Turkey. The protocols meet and discuss the arrangement before each visit," he stated.

"Turkey is a long-established state which does not host guests for the first time," the minister said, stressing that the protocol arrangements that Ankara implements for these kinds of visits are within the framework of international protocol rules and Turkish hospitality.

He was responding to criticisms after European Commission President Ursula von der Leyen was left without a chair and ended up on a side sofa, while President Recep Tayyip Erdoğan and European Council President Charles Michel took the only two available seats between the E.U. and Turkish flags. Michel and von der Leyen are both presidents of EU institutions, and, thus, are equivalent in the bloc's hierarchy.

Von der Leyen's seating on the sofa was mirrored on the other side of the room by Foreign Minister Çavuşoğlu, whom the commission says she outranks.

Ms. von der Leyen "should have been seated exactly in the same manner as the president of the European Council and the Turkish president," said her spokesman, Eric Mamer.

He added that von der Leyen, "expects the institution that she...