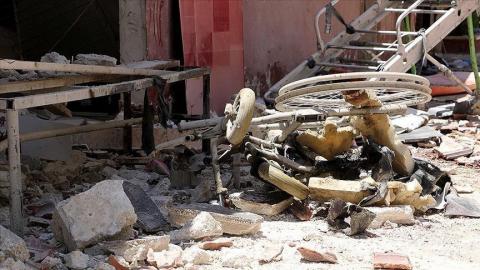 The U.S. on June 13 condemned an attack by the terror group YPG/PKK on a hospital in opposition-held northern Syria which killed at least 14 civilian patients and injured dozens.

"We condemn in the strongest terms yesterday's attacks on the al Shifaa Hospital in Afrin, Syria," U.S. State Department spokesman Ned Price said in a statement.

"This barbaric attack took the lives of children, medical staff, and first responders. Civilians and civilian infrastructure, including hospitals, must never be the target of military action," he added.

The statement said that the hospital's coordinates have been shared with the U.N. deconfliction mechanism for Syria.

"This attack is part of a recent escalation of violence in northwest Syria and it must end," it added.

The US called for an immediate nationwide ceasefire and a de-escalation in the country.

The statement made no mention of the YPG/PKK, a group the U.S. has supported for years, and the group behind the attack.

Turkey has long condemned the terrorist attacks of the YPG/PKK in northern Syria, including in border areas Turkey worked to make safe from terrorists. It has also denounced U.S. support for the terrorist YPG/PKK.

In a statement, the Governor's Office in Hatay, just across the border, said that grad missile and artillery shells fired by the YPG/PKK from the Assad regime-controlled Tal Rifat region hit the emergency department of the private Shifa Hospital in the center of the Afrin district.

Afrin was largely cleared of YPG...