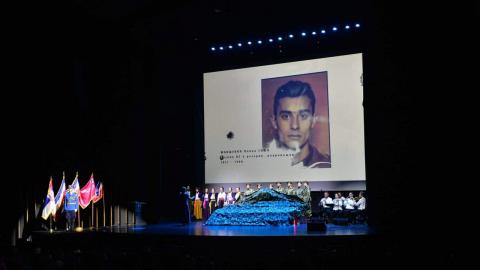 Minister of Labour, Employment, Veterans and Social Affairs Darija Kisic Tepavcevic thanked the fighters who participated and said that because of them, "the words 'heroism', 'honor' and 'homeland', have a higher meaning today".

"One hundred and eight brave Serbian soldiers gave their lives for the homeland. Behind them are unfulfilled dreams, unfulfilled loves and unborn children," Kisic Tepavcevic said.

Milo Leovac, father of Predrag Leovac, one of the soldiers who died, also addressed the event.

"Time does not heal wounds, but only teaches us to live with pain that does not subside. The pain cannot be lessened, nor will the sorrow ever pass, but such events and the attention paid to the memory of those who are no longer with us means more than you can imagine," Leovac said.

A total of 114 Kosovo Liberation Army fighters were killed in the Battle of Kosare; seven of them reportedly died in a mistakenly-targeted NATO air strike. Commemorating the guerrillas' deaths in 2016, Kosovo's then Prime Minister Isa Mustafa said that they "sacrificed themselves for the future of a free Kosovo".

The Battle of Kosare started on April 9, 1999 when the Kosovo Liberation Army attacked a border post between Yugoslavia and Albania.

It continued until June 10 that year, when Yugoslav President Slobodan Milosevic agreed to pull his forces out...