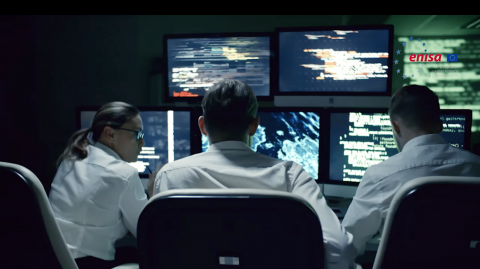 Employees of the EU Agency for Cybersecurity in Brussels. Image: ENISA

The EU, like the rest of the world, has been struggling to meet the threat of what is being called "an epoch of intensifying cyber-insecurity". In April, a range of EU institutions, including the Commission, were hit by a significant cyber-attack, part of a growing spate of brazen attacks being committed by states conducting espionage and seeking vulnerabilities, as well as criminal gangs often operating out of Russia, Iran and China.

The true scale of the problem is hard to assess, though Bitdefender's 2020 Consumer Threat Landscape Report estimated ransomware attacks increased by 485 per cent in 2020 from the year before. So far this year, losses of over $350 million have been incurred in ransomware attacks, according to US Homeland Security Secretary Alejandro Mayorkas.

The EU's planned Joint Cyber Unit, to be located next to the new Brussels office of the EU Agency for Cybersecurity (ENISA) and the Computer Emergency Response Team for EU institutions, bodies and agencies (CERT-EU), is an attempt to create a platform to ensure the bloc can provide a coordinated response to large-scale cyber-incidents and crises, as well as to offer assistance to member states in recovering from these attacks.

As such, it will bring together European cyber-security communities - including civilian, law enforcement, diplomatic and cyber-defence, as well as private sector partners - which it says too often operate separately. Invited participants will be asked to provide operational resources for mutual assistance within the Joint Cyber Unit.

Ultimately, the Joint Cyber Unit would allow for protocols for mutual assistance between member states and EU bodies, and for national...