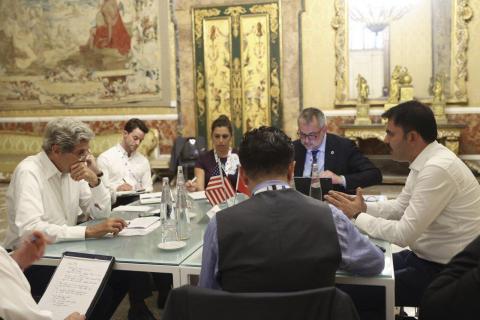 Turkey's Environment and Urbanization Minister Murat Kurum has urged the U.S. envoy for climate to exclude Turkey from the Annex-I list of the United Nations Framework Convention on Climate Change (UNFCCC) and receive a fair financial support to implement the convention.

The minister expressed Turkey's demand during a meeting with the U.S. Special Presidential Envoy for Climate John Kerry on July 22 on the sidelines of a two-day meeting of G20 member state environment ministers in Naples, hosted by Italy, the rotating president of the G20, which focused on climate change and sustainable water use and 2015 Paris Agreement objectives.

"In our meeting with Mr. Kerry, we reiterated our request to be removed from the Annex-1 list of the U.N. Climate Change Convention in order to make our fight against climate change more effective and to have access to climate finance, and we expressed that we expect their support for our just struggle," Kurum tweeted after the meeting on July 22.

In this context, he underlined that the completion of the memorandum of understanding negotiations and the signing of the memorandum before the 26th Conference of the Parties in Glasgow would be a step that will speed up the Paris Agreement process for Turkey, the minister stated.

Citing his messages in the G20 meeting of Napoli, Kurum said he elaborated on the scientific research that Turkey has carried out on the loss of biodiversity. "We conveyed many topics from the increasing protected area size in our country to the ecological corridors we have created with national gardens," he stated.

Kurum recalled that Turkey will host the 16th Conference of the Parties to the U.N. Convention on Biological Diversity and will assume its presidency for two years. "We...