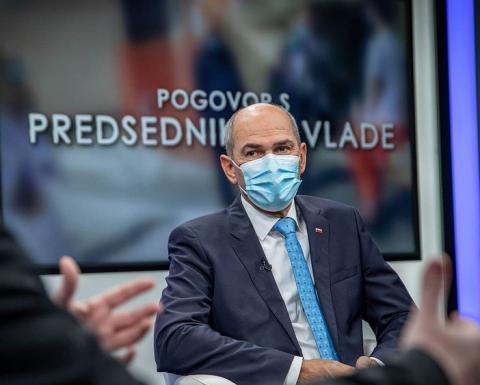 Ljubljana – Prime Minister Janez Janša appeared on Friday at the session of the parliamentary inquiry commission dealing with the government’s response to the Covid-19 epidemic. He was critical in his testimony of the preparedness of the public health authorities and noted the systemic problems in elderly care inherited by his government.

The commission, established on initiative of the opposition and chaired by Robert Pavšič of the Marjan Šarec List (LMŠ), is looking into the measures taken by the Janša government from its takeover to this March.

The prime minister told the MPs that “we started dealing with the epidemic on the first day when the government had been given the mandate”, adding that the first two weeks were about consulting with “people from the front lines.”

Janša noted that the government had consulted representatives of community health centres, care homes and civil defence, with the latter being without appropriate equipment.

“The advisory group for mitigating social and economic consequences of the crisis … was an ad hoc group that operated on a voluntary basis,” he added.

Asked about the government’s Covid-19 advisory task force, Janša said that this was permitted by law, adding that it did not have any particular influence or powers to take any measures, while advising the government on what measures to take.

The government has followed the group’s advice for the most part, he said, adding that in now advised the health minister, who then presents the proposed measures to the entire cabinet.

The prime minister noted that all members of the task force had been formally proposed by him after consultations with the relevant ministries, and some members had been added subsequently, also on the basis of crisis consultations.

Janša also touched on the situation in the National Institute of Public Health (NIJZ), which according to him operated as if it was the 19th century on the day when epidemic was declared in Slovenia.

“We did not have realistic data at our disposal when it was time to react. A network that will provide decision-makers with data that are required for measures to be taken is still being set up,” he stressed.

In addition to this, Janša also noted the staff shortage when it comes to epidemiologists, who were burnt out.

Regarding the excess mortality in the second wave of the epidemic last autumn, he said that this was mainly in care homes, where concentration of risk groups was high. Some homes could not establish red zones due to infrastructure constraints.

According to him, the epidemic had revealed elderly care had been neglected for decades. This issue is being systemically addressed only now with the laws on long-term care and on funding of investments in healthcare, he added.

The post Janša critical of preparedness for Covid-19 before govt took over appeared first on Slovenia Times.