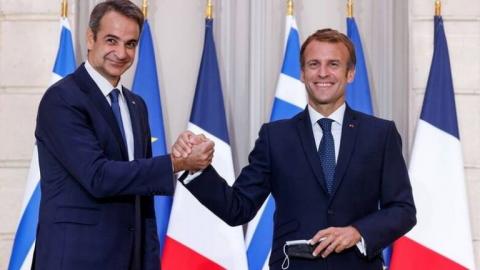 French President Emmanuel Macron and Prime Minister Kyriakos Mitsotakis this morning announced an historic mutual assistance defence pact and the signing of a deal for Greece to buy Belharra frigates, which will substantially upgrade the force of the Hellenic Navy.

The two leaders presented the agreements as a substantial step toward the much-touted EU defence autonomy and ended a joint press conference at Elysee Palace with beaming smiles and raised clasped hands, signaling the importance of the deals for both sides.

"This is a very important moment. We are at the apex of our cooperation,» Macron declared, noting that France played a strategic role in averting a military clash in the Eastern Mediterranean in the summer of 2020.

"This cooperation expresses our will to bolster our defence cooperation and the security of our countries and our common regions," he said.

"We intensified these discussions over the last week. We want to protect the territorial integrity of both of our countries, promoting security, stability, and prosperity in our regions."

Macron said that the agreements signal and confirm the deepening of Greece-France cooperation, the strategic stakes on the level of foreign policy, and the military part specifically, as well the area of the arms industry. This is underlined by Greece's procurement of three Belharra frigates that were constructed in France.
'

Vote of confidence in Greece-France relations'

Macron described the bilateral agreements as a vote of confidence in Greece-France relations and said that cooperation on the industrial level will intensify.

He said that both sides will have a maximum benefit and that new jobs will be created. "This agreement is part of a mutual...