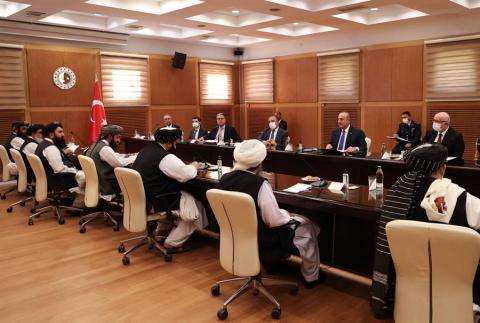 In talks with the Taliban, Turkey on Oct. 14 reiterated the importance of government inclusiveness for Afghanistan's unity, said a top Turkish official.

"We once again explained the importance of including people from all ethnic and religious groups, besides the Taliban, in the administration. Especially in these difficult times, this is important in terms of establishing unity and solidarity within the country," Çavuşoğlu said.

Muttaqi led a Taliban delegation for an official visit to Turkey to discuss bilateral issues as well as cooperation on the future of Afghanistan.

This is the first high-level contact between Turkey and the new administration in Afghanistan after the Taliban took power on Aug. 15.

Çavuşoğlu pointed out that the Turkish Maarif Foundation has 14 girls' schools in Afghanistan.

"They (Taliban delegation) also said today that all of the women, especially in the health sector, have returned to their jobs," he said.

Taliban officials have pledged to provide the utmost support to Afghan refugees who seek return to the country from Turkey, said Çavuşoğlu, adding that they also discussed possible measures to prevent a future migration influx.

The minister noted that the top officials from Turkey's National Defense Ministry, Interior Ministry, and National Intelligence Organization also attended the meeting with the Taliban officials.

He also underlined that the Taliban delegation conveyed requests to Turkey during the...