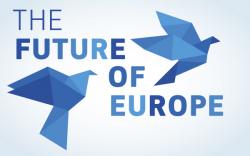 A stronger common European policy, the creation of a European army and common European embassies are among the ideas proposed by European citizens participating in the last meeting of the first Citizens' Council of the Conference on the Future of Europe. The meeting is being held in the European Parliament in Strasbourg with the participation of nearly 200 citizens from the 27 member states of the European Union, including six Bulgarians.

Many of the citizens' proposals are related to the current activities of the union, said in the discussion Federica Mogherini, former High Representative for Foreign Affairs and former Vice President of the European Commission. She supports the idea of ​​setting up a European Diplomatic Academy to train future union diplomats. According to Mogherini, the challenges facing the EU are related to consensus in common decision-making, a balanced policy towards China, as well as the enlargement of the union. It is in our interest and moral duty to move to the reception of the countries of the Western Balkans, she stressed and added that the young generation has a strong interest in joining.

Most Bulgarian participants in the civil panel told BTA that Bulgaria should be part of the Schengen area. Some of them want the EU to have its own army. According to Nelly Doncheva, in addition to a single currency, the EU must have its own language, similar to the artificial international language Esperanto. Most Bulgarian representatives at the conference also demanded a uniform standard of living in all member states of the union.

"The European Union in which I would like to live is a union of equality, a union in which the classes of Germany and Bulgaria should be equalized, people should feel safe and stay in their...