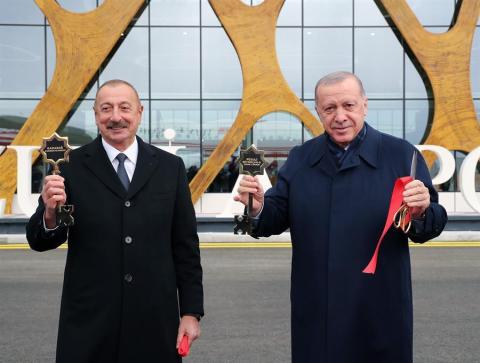 Turkey's President Recep Tayyip Erdoğan and his Azerbaijani counterpart has jointly inaugurated a new airport in the recently liberated area from the Armenian occupation.

Erdoğan is the first head of state to land at Fuzuli International Airport, Azerbaijan's first airport in the area recently liberated from Armenia.

This is Turkish president's third official visit to Karabakh's since the region's liberation in February this year.
The leaders cut the ribbon to officially open the new airport, then toured the building and spoke with authorities.
Erdoğan also attended the groundbreaking ceremonies of a highway in the region and the Smart Agriculture Campus, which will be built in Zangilan with Ankara's contributions.

During the visit, Turkey-Azerbaijan relations were reviewed in all aspects, and initiatives to further deepen bilateral cooperation was discussed.

Current regional and international developments, as well as bilateral relations, are also discussed in the meetings.

The Turkish leader traveled to Azerbaijan for a one-day working visit at Aliyev's invitation.

On Jan. 12, Aliyev laid the foundation stone for the airport, which has been completed in eight months and met the highest international standards.

Turkish companies also contributed to the airport's construction, which is equipped with automated systems and a control tower...