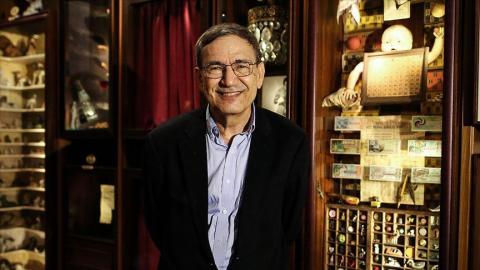 In the call, Pamuk warned that Venice, the lagoon city of Italy, could be under water until the end of this century due to the climate crisis. Contrary to popular belief, the call stated that Venice will not be swallowed by the waters quickly, but that it will gradually collapse.

The letter stressed serious humanitarian and ecological disasters caused by climate change will worsen if global warming is not brought under control.

In his letter, Pamuk said he once taught literature at Ca Foscari University in Venice, so he called on Draghi not only as an Istanbul resident but also as a Venetian.

"As you know, the best 'Venice novel' was written by Calvino. But events take place elsewhere. Venice is Beijing. Venice is Boston, Venice is Kyoto, Venice is Kolkata, Venice is St. Petersburg, Venice is Madrid, Hamburg, Paris and Istanbul. And to save Venice will be to save all humanity, all cities, Lagos, Cairo, Sao Paulo, New York and Hong Kong. Because the important decision you will make will not only save Venice. It will set an example for all humanity and we will understand that saving and preserving our cities mean saving our memory, intelligence and identity," said Pamuk in his letter.

"Mr. Prime Minister, it's in your hands to save Venice and all the other invisible cities of the world," he concluded.