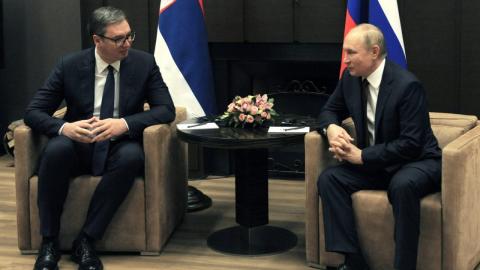 Serbia will continue to pay $270 per 1,000 cubic metres of natural gas for the next six months, President Aleksandar Vucic said after a meeting with Russian President Vladimir Putin.

The two presidents met in Sochi, Russia, where the renewal of a deal about natural gas deliveries was one of their topics. Vucic said: "Putin has shown friendship towards Serbia."

"We managed to get… for the next six months a gas price of an incredible $270, so that our price does not change; we also got an increase in the amount of gas in those six months and we got flexibility [in monthly delivery], for which I especially begged President Putin," Vucic told media after the meeting, Radio Television of Serbia reported.

Serbia imports almost all of its gas from Russia's energy giant Gazprom, with domestic production covering only roughly 15 per cent of its needs.

According to Bloomberg, in October Serbia was paying $270 per 1,000 cubic metres, far less than the benchmark rate that has recently soared.

Serbia's current deal with Gazprom, signed in March 2013, will expire on December 31.

Vucic said that he and Putin "also talked about a long-term contract and left certain elements, but until I sign it, I have no right to say that".

According to the meeting's transcript, published on the Russian president's official website, Putin told Vucic that "will come to an agreement on that; we will instruct our relevant companies to finalise this work; at any rate, we will find a solution that will undoubtedly be acceptable to our Serbian friends.

Putin also said: "We expect Prime Minister of Serbia [Ana Brnabic] to visit Moscow in December". Vucic announced that Putin will come to Serbia "between May and September next year".