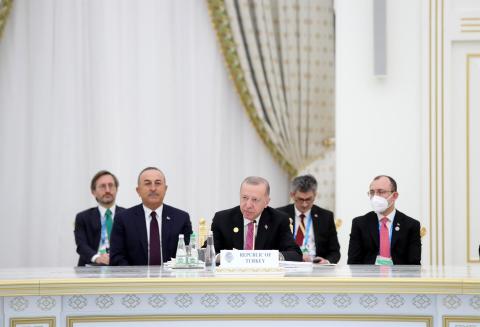 Afghanistan's economy should be revived to prevent a refugee crisis that will affect our entire region, President Recep Tayyip Erdoğan said on Nov. 28, speaking at the 15th Leaders' Summit of the Economic Cooperation Organization held in Turkmenistan.

"It is important to establish permanent peace and stability as soon as possible in Afghanistan, which is facing a serious humanitarian and economic crisis. It is our common wish and goal to develop an administration approach that will meet the expectations of all segments of the country," he said.

Turkey supports efforts to keep basic government structures functional in Afghanistan, including critical sectors such as health and education, the president said

The Turkish Red Crescent and Turkey's non-governmental organizations increased their humanitarian aid activities against the growing danger of hunger and famine in this country, he added.

He also called for ending unilateral sanctions against Iran for the sake of the region.

"Ending the unilateral sanctions on Iran and returning to the comprehensive joint action plan of all parties and reassuming their obligations will contribute to the economic prosperity and stability of our region," Erdoğan stated.

Pointing out that the importance of regional and global transportation networks has emerged once again amid the pandemic, Erdoğan said, "Our efforts to develop the transportation infrastructure in our region and to revive the modern Silk Road continue unabated.

The Caspian Crossing East-West central corridor initiative and the Baku-Tbilisi-Kars railway line, led by Turkey, are the most concrete manifestations of their efforts in this context, he said.

Turkic grouping to change its name to Organization of Turkic States: Turkish FM