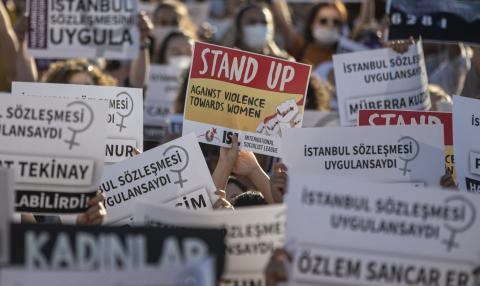 Women in masks hold placards and shout slogans during a rally against violence against women in Istanbul, August 5, 2020. Photo: EPA-EFE/ERDEM SAHIN

"The presidential decision on the annulment of the treaty did not comply with the law," Mucukgil said in a court case, the daily Cumhuriyet reported.

Mucukgil said only parliament could withdraw the country from an international treaty. "The decision should be annulled," Mucukgil added.

Its determination on the legality of President Erdogan's withdrawal from the treaty is still ongoing, but experts say the top prosecutor's opinion signals the possible eventual ruling of the State Council.

The Council of Europe's Convention on Preventing and Combating Violence Against Women and Domestic Violence was opened for signatures in May 2011 in Istanbul.

Turkey was the first country to ratify the treaty, but Islamist and conservative critics claimed that it undermined traditional family values, and Erdogan then withdrew his country from the treaty, which came into force on July 1, 2021.