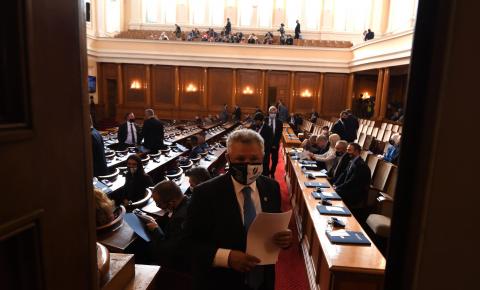 Just two days after the ousting of PM Kiril Petkov in a no-confidence vote, Bulgarian legislators on Friday adopted a declaration which would allow their government to potentially lift its veto on starting EU membership talks for neighbouring North Macedonia.

Some 170 MPs in the 240-seat parliament supported the declaration, 37 were against and 21 abstained. Both MPs from the outgoing ruling coalition and from the main opposition GERB party voted "Yes" to the motion.

The declaration, in essence, accepts the so-called French proposal for a breakthrough, which was officially handed to both sides last week as a last-ditch effort to solve the dispute, but which reportedly has not yet taken on a final form that would be acceptable for both sides.

In this regard, the Bulgarian parliament declarations set additional preconditions, which if met, could result in lifting the veto.

One seeks guarantee that Skopje's performance on good neighbourliness would remain a "horizontal criterion" throughout the process of North Macedonia's EU integration, and that the European Commission should inform the Council on this issue before each intergovernmental conference.

The parliament also wants "improvement" of Brussels' draft negotiating framework for North Macedonia "to more clearly reflect the position that nothing in the process of accession of North Macedonia to the EU can be interpreted as Bulgarian recognition of the existence of a 'Macedonian' language".

North Macedonia's path to EU membership talks has been blocked by the government in Sofia since 2020 over the so-called "history dispute". Bulgaria insists that the Macedonian identity and language are of Bulgarian origin and that Bulgarians are repressed in North Macedonia and must be...