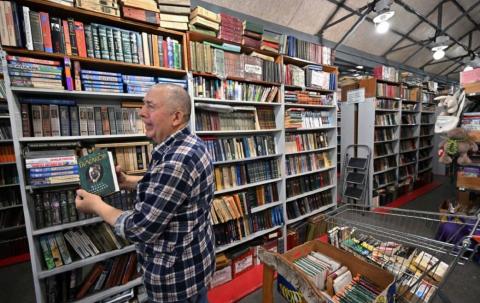 Ukraine plans to ban many books in Russian as part of a wartime battle against propaganda, but the new law has divided both literature fans and booksellers alike.

"We must not confuse Russian fascism with Russian culture," said Olexander Drobin, a bookseller at the massive Petrivka book market in the capital, Kiev.

"They made this law but nobody knows how to apply it. Should we take these books, pile them up in the street and burn them?"

Anatoli Gounko, another bookseller at the market, whose wares are almost all in Ukrainian, said the law was "necessary."

However, he said that even he finds it "a bit harsh to say you should speak Ukrainian and not Russian."

"Why should Russian only belong to Russia? Three hundred million people around the world speak Russian."

Ukraine's parliament approved several bills on June 19 aimed at "protecting culture from Russian propaganda." The new laws will enter into force once they are signed by President Volodymyr Zelensky.

They ban all books published in Russia and Belarus, Moscow's close ally in the war against Ukraine regardless of the author. Anyone breaking the law faces a fine.

The use on television and in public venues of Russian music composed after 1991 is also outlawed. But enforcing the laws could be tricky.

Books printed in Russian but published in Ukraine or countries other than Russia and Belarus would theoretically still be allowed as long as they were originally written in Russian and the author is not considered "hostile" to Ukraine.

Major classics of Russian literature, such as works by Pushkin and Tolstoy, would also be spared.

"There are more pressing problems. This is infantile," sniffed Natasha...