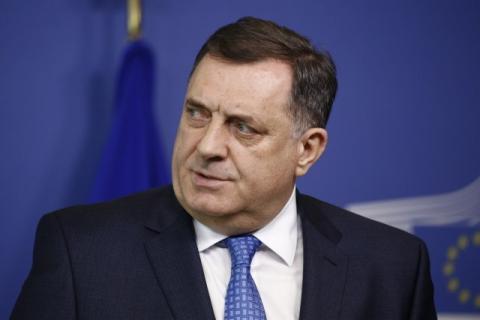 Serbian member of the BiH Presidency, Milorad Dodik, pointed out that no body in Bosnia-Herzegovina has given consent to the presence of any military formation, not even the British one.
Therefore, as Dodik said, they do not come to Bosnia and Herzegovina in a legal way.
"The fact that the other two members of the Presidency view BiH's sovereignty as political trade speaks about them and the policies that brought them there, but also about Bosnia-Herzegovina, which will not be able to survive those who has sworn in it," said Dodik to Srna when asked to comment on efik's statement.
Daferovi, who welcomed the decision of the Government of Great Britain to send "military experts to BiH" and that, as he believes, it will strengthen the NATO headquarters.
Serbian member of the Presidency emphasized that the NATO headquarters draws its presence in Bosnia and Herzegovina on the basis of the corresponding resolutions of the UN Security Council, which established the ALTHEA Mission and extended the mandate that expires in the fall.
"Since the conclusion of the Dayton Agreement, NATO has never had a direct engagement in BiH under the name of NATO. That engagement was achieved through the international military missions IFOR, SFOR and now EUFOR, which were approved by the UN Security Council. All UN Security Council resolutions related to those missions are of limited duration, mostly for 12 months," explained Dodik.
He emphasized that no resolution of the UN Security Council gave the NATO alliance a time-limited mandate, so NATO cannot appear as an alternative to EUFOR, unless there is a new resolution that would approve such engagement. Dodik pointed out that with the expiration of the UN Security Council resolution, no foreign military...