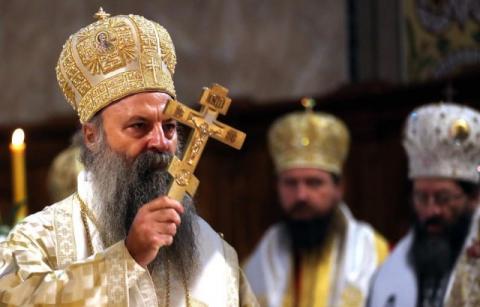 This was reported by the Montenegrin portal CdM, and this information was confirmed by the president of the Montenegrin Helsinki Committee, Miodrag Vlahovi, who expressed his respect for Akovi for that decision.
"The regional head of the border police, Vasko Akovi, resigned from that position today because the patriarch of the Serbian Orthodox Church, Porfirije, entered and left Montenegro with the entire delegation without any control or records. Great respect for this man," Vlahovi said on Twitter.
As a reminder, Patriarch Porfirije and Prime Minister of Montenegro Dritan Abazovi signed on Wednesday the Fundamental Agreement governing the relationship between the Serbian Orthodox Church and Montenegro.
The agreement caused indignation from the party of the President of Montenegro, Milo Djukanovi, DPS, which, together with several political factions, submitted an initiative in the local assembly for a vote of no confidence of the 43rd Government of Montenegro.
"The idea of signing an agreement with the Serbian Orthodox Church is an old idea, I regret that it was not implemented in the previous period. The government is determined to give all religious communities exactly the same rights. We are happy and satisfied if we contributed to that today," said Abazovi after signing the Fundamental Agreement.