Amidst global turmoil, with Ankara seeking to lure away key regional players, the Greece-Israel partnership is a pillar of effective regional strategy

The former head of the secret police, Vladimir Atanasovski, was jailed for six years . 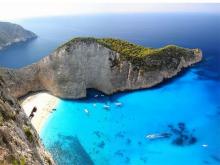 Islands with high tourist demand and viral loads are in threat of entering a grid of suffocating control.

The rise in cases across the country in recent days, combined with the growing number of hospital admissions due to the Delta mutation, has alarmed government and scientists.

The capital city of the Macedonian region of Northern Greece

With the highly transmissible COVID-19 Delta vaccine spreading quickly, Greek epidemiologists and doctors are incessantly calling on citizens to be vaccinated as otherwise the majority of unvaccinated people will be infected.

The Minister of Development and Investment, Adonis Georgiadis, sent an optimistic message about the course of tourism, noting that the goal has been achieved, as we are over 60% of 2019.

More than 100,000 people protested in Australia, France, Italy and Greece on July 23, sparking clashes with police as they railed against COVID-19 measures and government sanctions against the unvaccinated aimed at prodding more people into getting jabs.

Emerging from the crystal-clear turquoise waters of the Aegean Sea, Hans-Juergen Fercher has just returned from his fourth dive to where mounds of 2,500-year-old wine pots mark the site of an ancient shipwreck - and Greece's first underwater museum.

The Turkish Republic of Northern Cyprus (TRNC) on July 24 condemned an "unprincipled" recent statement by the U.N. Security Council on the reopening of the town of Varosha in Turkish Cyprus.