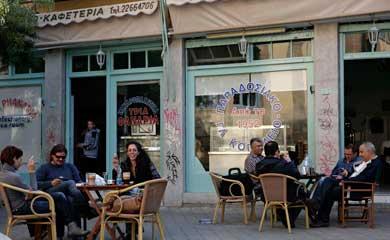 Cyprus's economic crisis could hasten a deal to end decades of enmity between the island's estranged Greeks and Turks, its outgoing United Nations envoy said on Thursday.

Reunification talks resumed between the two sides on February 11.

Peace prospects have come into sharper focus after the discovery of substantial natural gas reserves in the eastern Mediterranean, and the need for routes to export the commodity to Europe. A deal in Cyprus could enable gas to be piped via Turkey, easing Europe's reliance on Russian gas.

Do the math. If Cyprus were reunited it would lead to substantial investments to the island, Alexander Downer, UN special envoy since 2008, told journalists.

Cyprus was split when a brief Greek-inspired coup triggered an invasion by Turkey in 1974. Its Greek Cypriot population live in the south, and Turkish Cypriots in the north, separated by a ceasefire line patrolled by one of the world's oldest peace keeping missions.

The south, which is run by an internationally recognized government and a member of the eurozone, had to be bailed out last year by the European Union and the IMF after a banking sector collapse left it on the brink of bankruptcy.

The lenders anticipate that overall output will contract by about 10 percent before the economy begins to recover.

The continuing dispute over the island is also a hurdle to Turkey's ambitions to join the European Union.

Economic circumstances, harsh as they are, can and have reminded people that a solution is beneficial for the island, said Downer, a former Australian foreign minister, who steps down from his UN post next month.

Preliminary findings of a survey into the economic benefits of a peace deal prepared by the PRIO peace...

Turkey: Jihad against Cyprus – Analysis
Cyprus: Rumors of a huge hydrocarbon deposit in the Block 6 – Nothing to announce yet says the government