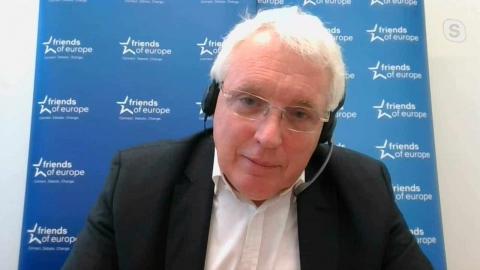 Jamie Shea was the public face of the NATO campaign to drive Serbian forces out of Kosovo in 1999. Admired in Kosovo and reviled in Serbia, his was an inescapable presence on TV for months.

Today, the now-retired NATO veteran has a lower public profile as Professor of Strategy and Security at Exeter University in south-west England.

In an interview with BIRN Kosovo's TV programme 'Jeta Ne Kosove' about the NATO campaign, which terminated Serbian rule in Kosovo, he recalled "shocked and tense moments" in June 1999 when Russian troops entered Kosovo from Bosnia and seized Pristina airport before NATO troops had even arrived.

For days, there was talk of a showdown, or even war, between NATO and Russia over the then Serbian province.

"The real danger that we had on that particular day was the worry that the Russians would send in specialised forces, more forces, directly from Russia, over Eastern Europe and in to Kosovo to reinforce the Russian troops that had moved in, so we would be dealing with a much larger Russian contingent, which could occupy the northern part of Kosovo or another sector," Shea recalled.

That prospect made NATO planners worry that Kosovo was about to be divided like Germany between Russian and Western zones.

"Think of Berlin in the Second World War," Shea explained, recalling the East-West partition of the German capital after the war, which continued for almost half a century.

For Shea, that particular tense moment ended when the Czech Republic, Hungary and Poland, which had just joined the North Atlantic alliance, blocked their airspace and so prevented Russia from sending in additional troops by land or air.