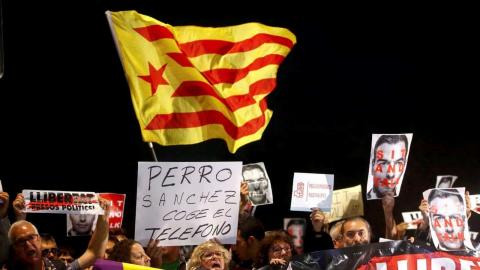 He was echoed by Stjepan Mesic, the last president of federal Yugoslavia and president of Croatia from 2000 to 2010, who wrote to Spanish Prime Minister Pedro Sanchez to express concern over the "draconian" sentences.

"I did it because I too was a political prisoner," Mesic, a former communist politician who was jailed for a year in 1975 for his support for the liberal-nationalist 'Croatian Spring' reform movement, told BIRN.

October's prison sentences have re-ignited the crisis over the issue of independence for the northeastern region centred on Barcelona. The case of Slovenia, a country of two million people and the first republic to secede from Yugoslavia in 1991, has frequently been cited as a potential model for Catalonia, though it was accompanied by a 10-day war.

In the run-up to the court ruling, Kucan became one of the initiators of the 'Committee in Support of Catalan Political Prisoners in Spain,' gathering a number of Slovenian politicians, MEPs and academics.

"Firstly, we are expressing support for political prisoners and secondly, supporting their demand to move the problem from the legal and repressive field to the field of politics," said Kucan, who as leader of the League of Communists of Slovenia in the late 1980s presided over the republic's secession from federal Yugoslavia.

Kucan urged the "search for a peaceful political solution," stressing that his Committee's support for the jailed Catalans did not amount to endorsement of Catalan independence, "which is...