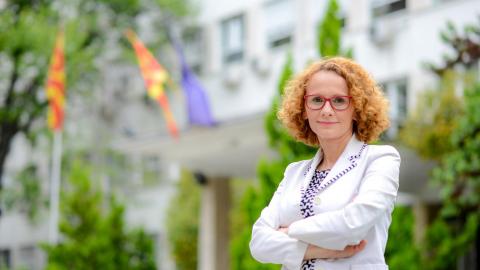 Voters, she said, must choose between that future or a return to the past under VMRO-DPMNE when the party was accused of monopolising power, undermining independent institutions, stifling media freedom and spending wildly on nationalist vanity projects.

Shekerinska said the country faced a similar choice to 2006 when, just a year after North Macedonia clinched EU candidate status, Gruevski's victory over the Social Democrats was followed in 2008 by a Greek veto on Skopje's NATO accession and years of drift and democratic backsliding.

Shekerinska recalled being asked then what would happen if VMRO-DPMNE won.

"I might have been a bit optimistic then. I said, 'I don't see a danger because no one would be crazy to challenge something that worked,'" she told BIRN, speaking in English.

"So I'm not being naïve this time and I say a lot is at stake in these elections."

"This government, definitely, can be criticised for many things. But we have restored not only the confidence that elections are about citizens, not about the persons who control the electoral system, and we have shown that democracy is our value."

'You're either ambitious or you're a failure'

An opinion poll published in late December by the think tanks Macedonia Centre for International Cooperation and the Institute for Democracy-Societas Civilis, the Social Democrats have a narrow lead over VMRO-DPMNE, 22.1 per cent versus 20.4 per cent.

Fabio Panetta: ECB will support economy ‘for as long as necessary’