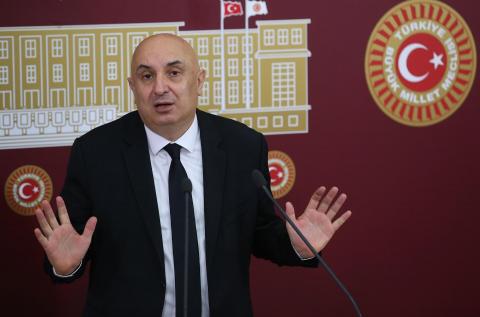 Justice Minister Abdülhamit Gül said that the summary of proceedings for Ozkoç will be sent to parliament immediately.

Özkoç had criticized Erdoğan at a press conference on March 4 over his remarks on Turkish troops killed in Syria's northwestern province of Idlib, where Turkey has launched "Operation Spring Shield."

His presser was aiming response to Erdoğan's harsh criticisms against CHP leader Kemal Kılıçdaroğlu during his party's parliamentary group meeting on March 4.

The Ankara Chief Public Prosecutor's Office also launched an investigation against Özkoç for "insulting the president" for his words at the press conference he held in parliament.

Later in the day, Özkoç delivered a speech during a session at the grand assembly.

A fight broke out in parliament on March 4 between AKP and CHP deputies as Özkoç took the floor for his speech. There have been injuries in the biggest parliament fight in recent years.